In the final issue of Frank Miller and John Romita Jr.’s 2019 DC Black Label miniseries Superman: Year One, there’s a framed newspaper on the wall of the Daily Planet offices. Squint and you notice the headline: “MAN BITES DOG: MSM BLAMES TRUMP.”

This didn’t come out of nowhere. Over the last 30-odd years, Miller took a public turn from the beloved Mickey Spillane of comics, with The Dark Knight Returns and Sin City, to the right-wing crank who once described Occupy Wall Street as “a pack of louts, thieves, and rapists.” (He walked the statement back in a 2018 interview).” See also 2011’s Holy Terror, initially pitched as a Batman project, and dubbed Islamophobic by critics upon publish.

The past year has shown a pattern of writers giving overt voice to their political opinions through superhero comics, or for controversies where they were prevented from doing so. Marvel and DC, the most visible publishers, are at the center of the ideological debate. Based on the decision-making, the two companies appear to have distinct approaches to talking politics in their paperbacks.

On the opposite side of the political spectrum from Superman: Year One, and one that’s in DC continuity, is Lois Lane, by Greg Rucka, Mike Perkins, Paul Mounts & Simon Bowland. In the series’ first issue, released this past September, Lois faces off with White House Press Secretary Lee-Anne McCarthy, an amalgamation of former Trump administration press secretary Sarah Huckabee Sanders and senior counselor to the President Kellyanne Conway. The confrontation rests on a Daily Planet story, penned by Lois, that reveals evidence that administration members are profiting off of, as Lois puts it, “quote-unquote tender care camps,” at the border. The parallel is blunt. 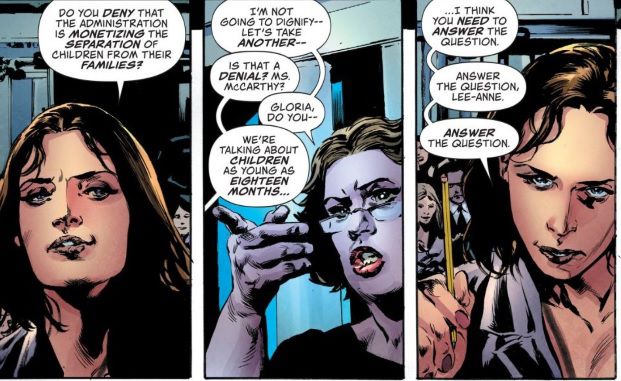 The scene plays as triumphant, and it mostly works. As a journalist who’s faced harassment over things I’ve written (though, being a cis white dude, I’ve faced far less than others), to read a scene of comics’ most prominent journalist calling out monsters in power who, among their many other sins, have contributed to delegitimizing an already-embattled profession into the ground, is pretty inspiring. It’s a fantasy, but a nice one.

But what all this says to me is that, when it comes to certain creators and certain books, DC Comics is happy to allow political subtext become text. This sits in contrast to Marvel Comics.

Twice in 2019, in what should’ve been a time of celebration for them, Marvel found itself embroiled in political controversies. The first came last August, when Maus author and Pulitzer Prize-winner Art Spiegelman went public with the news that his introduction to a limited edition hardcover of Golden Age Marvel comics published by the Folio Society was refused.

The qualms were reportedly over two sentences, which the Folio Society told Spiegelman went against the Marvel’s desire to be apolitical: “Auschwitz and Hiroshima make more sense as dark comic book cataclysms than as events in our real world. In today’s all too real world, Captain America’s most nefarious villain, the Red Skull, is alive on screen and an Orange Skull haunts America.” 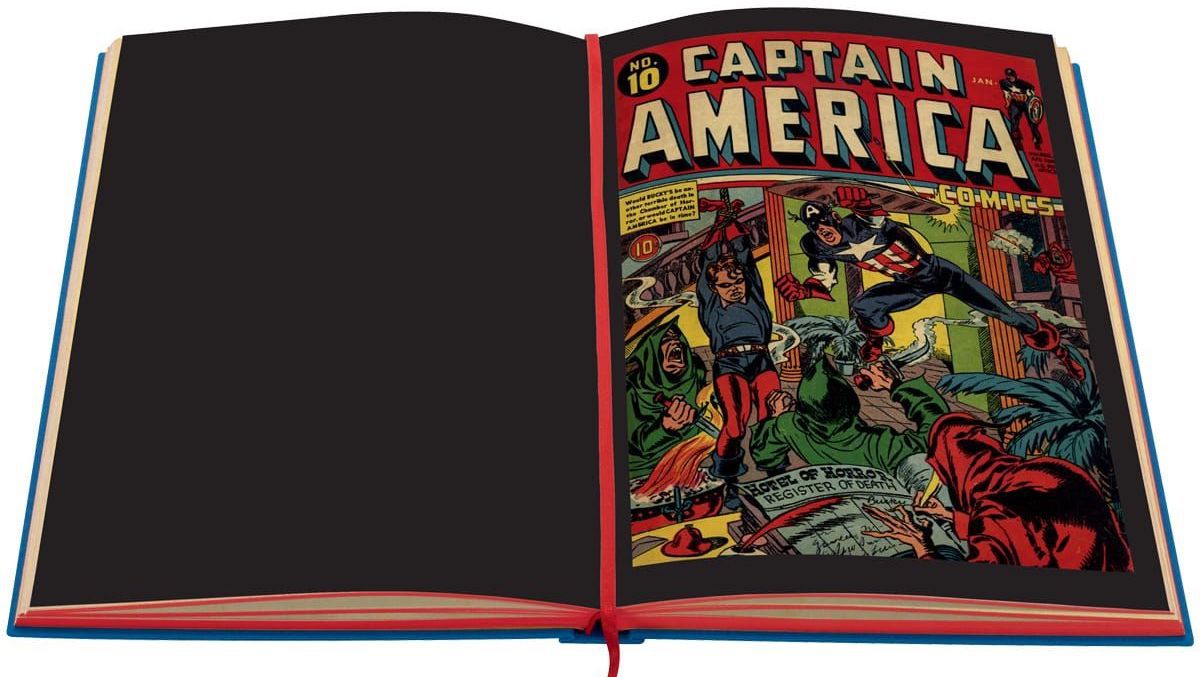 Spiegelman withdrew his introduction, later publishing it in full as an essay in The Guardian.

That same month, in the lead up to Marvel Comics #1000, Marvel altered the work of Mark Waid, a long-time writer for the publisher. A text piece written to accompany a Cap illustration by John Cassaday and Laura Martin originally said, in part (per The Hollywood Reporter):

The system isn’t just. We’ve treated some of our own abominably … Worse, we’ve perpetuated the myth that any American can become anything, can achieve anything, through sheer force of will. And that’s not always true. This isn’t the land of opportunity for everyone. The American ideals aren’t always shared fairly. Yet without them, we have nothing.

The final essay omitted these lines and, as a whole, was more from Cap’s perspective, and considerably more generic and uplifting. Waid later told Newsarama that “the abridged version that’s being circulated by news outlets severely mischaracterizes what was actually written.”

Similar incidents can be tracked through the years. In October 2018, Marvel fired author Chuck Wendig — who’d penned a miniseries about the superhero Hyperion and an adaptation of The Force Awakens for the company, in addition to the Star Wars Aftermath novel trilogy — and canceled his upcoming miniseries, Shadow of Vader, a mere seven days after announcing the project. As Wendig put it on his blog, Terrible Minds, his firing was “because of the negativity and vulgarity that my tweets bring […] It was too much politics, too much vulgarity, too much negativity on my part.”

Wendig is notably outspoken and profane in opposing the Trump administration on Twitter, and has been since before his first work at Marvel. Waid and Spiegelman are also no stranger to controversy themselves: Waid was heavily criticized over the racial aspects of his and J.G. Jones’ Strange Fruit miniseries; Spiegelman, over his unwavering support for the Islamophobic cartoons of Charlie Hebdo.

Each of these incidences of Marvel asking creators to tone down “political speech” have ignited public controversy, and reminded fans of a key player in the publisher’s business: Marvel’s CEO, Issac Perlmutter, who has close and public ties to President Donald Trump.

Is this a top down order?

In 2018, ProPublica reported that the reclusive billionaire is one of three Trump mega-donors (known collectively as the Mar-A-Lago Crowd) who are unofficially running the Department of Veterans Affairs as a reward for their loyalty. It’s understandable that readers might ask: Is this push for the “apolitical” a top down order from someone with extensive ties to the very figure that Spiegelman sought to critique?

While DC Comics hasn’t had controversial edits hit the public eye, political text shines through. The company published Superman: Year One under the Black Label imprint, touted from its unveiling as a place where creators can tell whatever story they want to with DC characters, free of age or continuity restrictions. But Black Label also put out December’s The Dark Knight Returns: The Golden Child by Miller, Rafael Grampá and Jordie Bellaire, in which a Trump-a-like runs for governor as part of a plot by Darkseid. It’s a plot point more reminiscent of Miller’s work in the 1980s, when he created characters like Marvel’s Nuke, and framed him as a mentally unbalanced Vietnam vet used as a destructive tool by military strongmen from all over the world.

Similarly, while Lois Lane is spinning out of the in-continuity events of Superman and Action Comics, it’s meant, at least partially, to appeal to fans of Rucka’s stellar work for DC in the early 2000s on titles like Wonder Woman, The Question and Gotham Central. In both cases, if this trusted creator was found by readers to be censored in any way, there’d be backlash.

Polygon reached out to both Marvel and DC representatives for comment or clarification on the companies’ internal stance on overt political content in its books, but did not receive responses by press time.

Controversy over “politics in comics” — or lack thereof — isn’t a new phenomenon by any means. For one memorable example, in 2009’s Action Comics #900, DC film screenwriter David S. Goyer had Superman renounce his American citizenship. After being admonished by the US government for joining in a nonviolent protest in Iran, given that he is, to them, a symbol of American policy, the Man of Steel said that “Truth, justice and the American Way […] it’s not enough anymore.”

And this wasn’t Goyer turning Superman into a political figure; the character has been that way since the very beginning.

In the first issue of Action Comics, published in 1938, Superman beats up a wife-beater, saves an innocent woman from execution, and forces a corrupt senator to confess that he’d stirred up a South American war because he was in bed with the arms industry.

Flash forward to 1961, and the dawn of the Marvel Age of Comics, with Fantastic Four #1 by Jack Kirby and Stan Lee. A flashback to the origins of the superteam sees Ben Grimm angrily point out to Reed Richards that he has no idea what the cosmic rays of space could do to them. To which Sue Storm melodramatically replies, “Ben, we’ve got to take that chance…unless we want the Commies to beat us to it!”

The only reason anybody younger than 50 knew who Green Arrow was before Stephen Amell climbed a salmon ladder is due to Denny O’Neil and Neal Adams making him an out and proud liberal who crossed the country with Green Lantern as the “Hard Travelin’ Heroes,” busting bad guys and debating political philosophies along the way. Comics have always gone there.

Balking at a few political references in the name of preserving corporate standards sits in contrast to the history of superhero comics, an industry that came to life thanks to two Jewish kids from Cleveland in the ‘30s. When the Big Two lean into the political aspects of their creation instead of running away, we all benefit.

Tom Speelman is a contributor to Polygon, Comic Book Resources and other websites. He is also the co-host of the Pokémon podcast GOTTA RECAP ‘EM ALL! (available on iTunes, Spotify and Libsyn) and has adapted, edited or proofread over a hundred titles for Seven Seas Entertainment, including Magical Girl Spec-Ops Asuka by Makoto Fukami and Seigo Tokiya. He can be found on Twitter @tomtificate or thinking about Spider-Man.